Ozzy was adopted by a family in southern California that consisted of three kids, two adults, and a cat named Norm. The pit bull had always taken a certain affinity to the cat, but the feeling was not mutual. The friendly dog tried everything to win Norm over, but the cat just wasn’t having it. Although the dog didn’t get the friendship he wanted with the cat, he had plenty of things to occupy his attention. Ozzy loves the kids and is so sweet he runs up to every baby stroller he sees and just wants to give kisses. But Ozzy was about to get what he’s always wanted most. Jennifer Lajeniss decided to take in a pregnant neighborhood cat named Winnie. Jennifer had become more and more concerned for the stray the longer it had been living on the streets. Winnie ended up giving birth to five kittens, and Ozzy was in heaven! 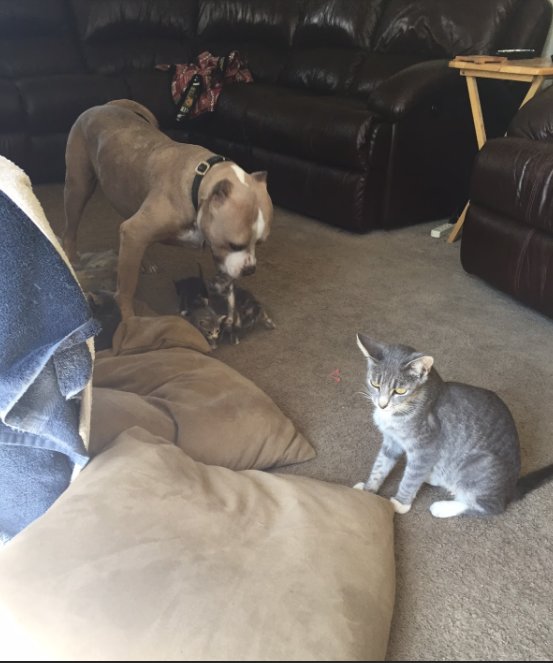 He finally got his kitten family! Ozzy is the absolute best uncle. He becomes concerned anytime he hears the kitties crying and proceeds to nurture and coddle them. Not only do the kittens love their pit bull uncle, Winnie likes Ozzy as well. She seems extremely thankful to him for helping to take care of her babies. She’s been seen rubbing up against Ozzy from time to time. 🙂 Four of the kittens will eventually go up for adoption. But Winnie and one of her babies, Troublemaker, are here to stay. The sweet pit bull will live on in harmony with his amazing cat family, and he wouldn’t want it any other way. We’re so glad Ozzy gets to spread all of his love around to his feline friends. 🙂